From the Writer of DESTROY ALL HUMANS

It’s been a space-tastic experience seeing Destroy All Humans grow from a pilot script to a podcast, evolving from facehugger to a chestburster now free to skulk around the mechanical vents of an audience’s ear canals.

Unlike the movie “Alien Covenant” (2017), working with Eric was an exciting ride, and early on, I knew “Destroy All Humans” had a good home with the Venus Radio Theater (and not just because they share an outer space motif!)

The whole process was wonderfully collaborative, and I enjoyed being involved with casting, working with actors, and Eric’s willingness to put up with my many many many nit-picky notes when it came to audio cues.

In general, as a writer, sometimes my creative contributions end at the scripting phase, leaving any continued part of the process locked in a “Sigourney Weaver”-esque cryogenic stasis, but the Venus Radio Theater kept me involved and armed me with a metaphorical mechanical exosuit to create an even wilder, funnier script. 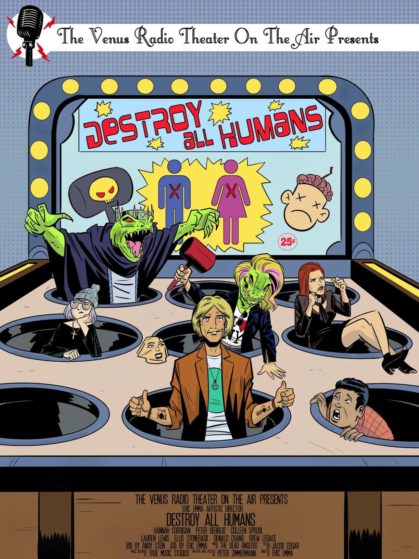 I’d like to thank the incredible cast: Hannah Corrigan, Peter DeGiglio, Colleen Sproull, Lauren Lewis, Donald Chang, and Ellis Stoneback for taking the material to the next level and contributing great ideas and lines along the way! Sound design was top notch thanks to the talents of Andy Stein (especially nailing the “Sun Guy” karaoke sequence). Chris Cox for the musical score, particularly the Sklurch theme! And Jacob Edgar for his work on the poster and drawing Stephen’s radical blonde mustache.

And of course! Thanks to Eric for putting this all together. A producer, a pal, and the best darn Agent Phillips I could ask for. Thanks for your friendship, ya mamaluke! I’ll catch you at the king crab buffet!*

In space, no one can hear you scream, but they can see me smile because of how happy I am with how Destroy All Humans turned out!

Writer and Creator of DESTROY ALL HUMANS!