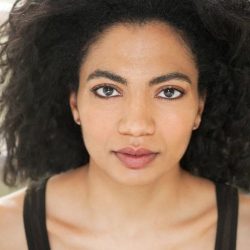 Toni Ann De Noble is an actress, writer, and host hailing from Jersey City, NJ and holds an MFA from Columbia University where she received a scholarship and served as liaison to both Kristin Linklater and Andrei Serban during the 3 year grad program.

Toni Ann’s award-winning solo play Eulogy for Cookie went up at Nuyorican Poets’ Cafe Play Festival where it took the top prize. Her play went on to Dixon Place and other venues in NYC. She is a founder of BREAD Arts Collective where she curated, hosted and performed in the variety show PumperNips. In the New York Times’ review for The Revolving Cycles Truly & Steadily Roll’d, Jesse Green wrote “Three very different women- a grieving mother, a strung out addict, and a young protege, all played hauntingly by Toni Ann DeNoble”

Toni Ann won Best Supporting Actress for her role in the award-winning short film, A Storybook Ending. The film was well received in the festival circuit and most notably at the 2019 American Black Film Festival where it was bought by HBO, and premiered in early 2021.

Before getting her Masters Degree Toni Ann worked as a teacher for at-risk youth and was the Director for day cares & teen parent programs in Hudson County, NJ. She is a Board Member of the Kennedy Dancers in Jersey City, NJ.