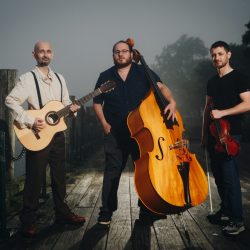 Formed in late 2015, The Dead Anglers are an original trio blasting out of Providence, Rhode Island. They create beautiful, bizarre, and energetic offbeat caravan music that forms the emotional tapestry of Venus Radio Theater’s fantastic tales. The Anglers are available for original music commissions, scores, live performances, and studio work. They typically can be found writing, playing, or recording their own brand of sonic science. If you are in or from the New England area, don’t miss out on traveling on their sound to a celebration of the oft-forgotten musical tradition of Eastern European Folk!

Born and raised in South Yorkshire, England, Chris has been playing guitar for thirty years. He spent his formative years immersed in “extreme” music. Before moving to the US in 2004, he had cofounded and played with the avant-garde metal band, Ebony Lake (Cacophonous records, London). After settling in Rhode Island, he returned to his original love: classical guitar. He now crafts original tunes informed by a forgotten age. Needing a violin and bass to complete his vision led to the formation of The Dead Anglers, a “modern” Eastern Folk band!

Growing up in Narragansett, RI, Antonio has had a fiddle in his hands for as long as he can remember. He received his B.A. in Music Studies at the University of Rhode Island, with a minor in Philosophy. He has appeared in multiple touring bands including Southern New England’s premiere rock orchestra, “Ornament.” He currently is in the band, “Back Rhodes” in addition the Dead Anglers.

Matt is a freelance musician and private music instructor based in Warwick, Rhode Island. His love of music began when he first picked up the electric bass at the tender age of twelve. That love only grew from there and led to a B.A. in jazz studies from the University of Rhode Island. At URI, he also learned how to play the tuba and upright bass. In addition to his work with the Dead Anglers, Matt also plays with the Leland Baker Quartet, Michelle Cruz, Joseph Godfrey, and various other prominent New England musicians. He hopes his music and teaching bring joy to all.