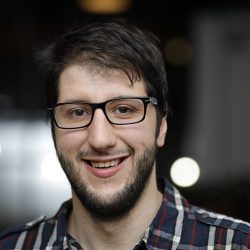 Growing up in-between the hearing and deaf world due to his parents’ deafness, Eric witnessed the devastating and isolating effects of oppression and under representation. Juxtaposed with his own identity as a hetero-normative white male, he has always striven to create and promote stories that bring cultural awareness to the world. He received a B.A. in English Literature and Film Studies from URI and a M.F.A. in Dramatic Writing from NYU Tisch School of the Arts. He has written stories for a variety of mobile apps, including Hooked and Gust, and was part of the writing team that adapted “Pretty Little Liars” for Pocket Gems’ Episode. He produced the award-winning feature length documentary, “Between the Shades”, which promotes cultural awareness of the LGBTQI community. He’s also served as a producer and consultant for such media firms as Verse Interactive, Ohlinger Studios, and Sherwood Productions. His film shorts have been featured in numerous film festivals such as the New York International Shorts Fest, Speechless, High Peak International Film Festival, and others.

He currently teaches/mentors New Media/Visual Artists at the International Center of Photography.