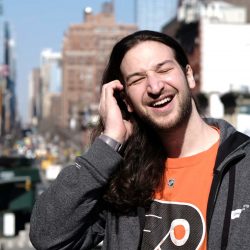 Andy discovered his passion for sound design during his studies at NYU’s Music Technology program. One assignment in particular, which involved re-working the audio of an episode of Robot Chicken, revealed to him the incredible complexity of sound design. Andy began his career working as a boom operator and mixer on multiple film productions in New York City. Once he had ground his teeth in production, he transitioned to working solely in post-production. Andy has gone on to rack up nearly 30 different film credits. In addition to his film work, Andy loves conducting on-location recording and using his “found” materials as the secret sauce in his sound design.  We have affectionately christened him the “Sound Sorcerer”, and we’re indebted to him and the magic he wields to conjure the phantasmagoria of the Venus Radio Theater!