Uncle Benny and the Theatre

I remember the darkness. The scent of the fog machines. My eyes taking in the faces of thousands of other children. In our rainbow-colored, plastic seats, we sat around a glowing stage anxiously waiting for the show to start. Like all things Rhode Island, there’s a feeling that I miss:

The Rhode Island based “Warwick Musical Theatre” was bulldozed over twenty years ago to build a Lowe’s home improvement store. In today’s world, most of the stories we consume are put out by monolith entertainment corporations that we have no stake in. We’re told a successful story is a story that can be enjoyed by ALL. The Warwick Musical Theater was not for all; it was for a couple thousand Rhode Island kids and adults. We were a community enjoying art for us by us. Stories that meant something to us. That meant something. 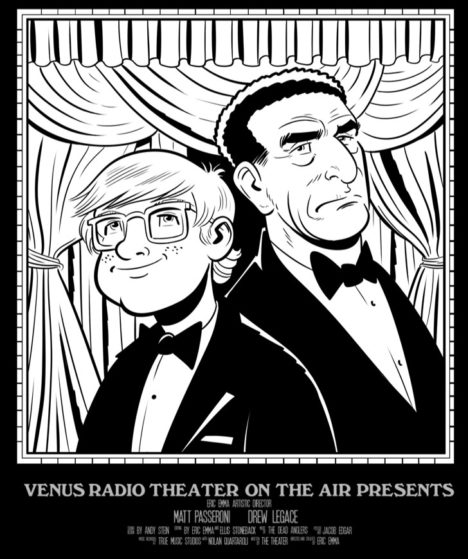 “Venus Radio Theater on the Air Presents” podcast takes place in a fictional theater called the “Greenwich Musical Theater” located in East Greenwich, Rhode Island   Uncle Benny, an old wise guy gone straight, has bought this beloved theater with the intent of tearing it down to build over-priced condominiums. However, till that happens, Uncle Benny allows his earnest, nineteen-year-old nephew, Bobby, to put on stage productions for the community with the agreement that Uncle Benny will be the master of ceremonies and allowed to give his two cents on the productions that he considers to be liberal propaganda.

Uncle Benny and Nephew Bobby are an exploration of my compartmentalized love for Rhode Island. To say it was ours, while a lovely, quaint notion is also an acknowledgment it was a theater for white middle-class Rhode Islanders. As we tear down the old, can we build a new sense of community-based on a diverse set of histories/traditions?

How will the old order respond to that? But more importantly, how does the former majority deal with not being the majority?

The stories that grace the “Greenwich Musical Theater’s” stage tell of that new community. I wanted a way to explore the white pushback that we’re seeing now and in a way that felt organic and true. Uncle Benny represents the people I know back home in Rhode Island, but so do Nephew Bobby and the liberal crowd.  It is my sincere hope that all those who listen to “Venus Radio Theater on the Air” will have that same feeling of anticipation and community that I had as a child, but also that this time we can all take pride in being part of a community that can belong to anyone that wants to be part of it.